Frederick Banting was awarded the Nobel Prize for the invention of insulin along with his colleague,  Charles Best, in 1923.

Frederick Banting was born in a small farm town in Canada.  He attended Victoria college, where he flunked out his first year!  Despite that, he was accepted into medical school.  After medical school, he attempted to join the army, but they initially refused him due to his poor eyesight.  He tried again however and was accepted.

In the military, he sustained serious injuries during battle, but assisted other injured soldiers and was awarded the Military Cross.

Dr. Banting then completed medical residency in Canada, but the hospital he was at did not want to hire him.  He moved to London, where he opened a practice which was not successful.

Dr. Banting read an article about the pancreas, and about a new thought at the time that the pancreas may be the organ that produced insulin.  As we know now, insulin is a hormone that helps the liver, fat and muscle absorb glucose from the blood. Diabetic patients cannot make enough insulin, and in those days a patient with diabetes was put onto a hospital ward until they died, as there was no treatment.

Dr. Banting and his student Charles Best became obsessed with finding out how to isolate insulin, and hit upon the idea of extracting insulin from the pancreas of cows and pigs.

Dr. Banting and Charles Best won the Nobel Prize for Medicine in 1923.

The team of scientists sold the patent for insulin to the University of Toronto for $1 to ensure that it would be available for all diabetic patients.   The University then gave the patent to pharmaceutical companies for free!

Despite that, there are now no low priced generic insulin products on the market.  In the past,  pharmaceutical companies were even charged with a price-fixing scheme, but it had little impact, and insulin continues to be a billion dollar industry.   In the last ten years, insulin prices have soared from $100–$200 per month to $400–$500 a month. 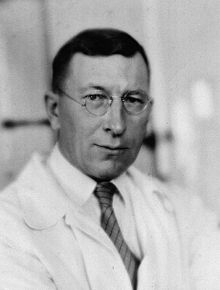