The population of the homeless is currently over 500,000 in the United States.  It is estimated that there are approximately 400,000 homeless shelter beds available.

According to the Substance Abuse and Mental Health Services Administration, 20-25% of homeless suffer from severe mental illness, 38% abuse alcohol and 26% abuse other drugs.

One out of every four homeless individuals experiences violence.

Other medical problems that affect the homeless include malnutrition, parasitic infections, dental disease, liver disease such as hepatitis, and sexually transmitted diseases.

There is currently a typhoid fever outbreak in California that has affected 167 people.  Typhoid fever is spread through from infected body lice.  It also sickened a first responder.

Tuberculosis just spread throughout the homeless population in Atlanta, sickening many individuals.

Other diseases such as Shigella, spread by bacteria, and Trench fever, spread by lice, have also swept through homeless communities.

The death rate of homeless individuals is 58% higher than the general population. 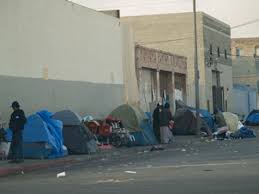