Michael, a 14-year-old, tells his mom he has a sore throat.  She thinks he feels feverish, so she gives him a Tylenol and tells him to drink more fluids and to rest.

The next day Michael doesn’t want to get out of bed.  He says he feels too tired, and his muscles ache.  His mom asks if he still has a sore throat, and when he says yes, she gets a flashlight to look: 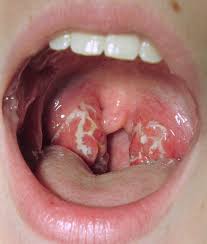 She is surprised at how bad his throat looks, and calls his doctor for an appointment.

What should the doctor do?

If you guessed 3. Check a blood test for mono, you are right!

Mononucleosis is caused by a virus.  The disease often occurs in teenagers and young adults, and causes fever, sore throat, enlarged lymph nodes, and fatigue.  The symptoms may last for up to four weeks.  Mono used to be called the “kissing disease”,  because it is spread by saliva, but it can also be spread through coughing, sneezing, or sharing utensils or drinking glasses.

The test for mono is a blood test, called a “monospot”.

Unfortunately the only treatment for mono is rest, fluids, and medication such as ibuprofen to reduce pain.  Prednisone, a steroid,  can be used to decrease tonsil swelling, but can have side effects.  Antibiotics such as penicillin do not help mono.

Complications of mono are rare but can include rupture of the spleen, liver inflammation, and upper airway obstruction from tonsil enlargement.

Mono can be mistaken for strep throat, as both can cause the tonsils to appear infected.  Strep is typically treated with penicillin.  Cold symptoms can include a sore throat, but the above photo shows tonsils that are very infected, so would be more concerning for mono or strep throat.