Where did the phrase “blowing smoke up your arse” come from?

This was actually a medical treatment in the 18th century!  The treatment was so popular that tobacco smoke enema kits were manufactured and sold for house-hold use.

Tobacco smoke enemas started in the 18th century by British doctors, who believed the treatment would resuscitate drowning victims.  Medics patrolled the Thames river, ready to perform a tobacco smoke enema on anyone who had drowned.

Of course eventually they learned that blowing tobacco smoke up the patient’s butt didn’t actually help, and that is why the phrase has now been adopted to mean an insincere compliment.

Eventually, the rescuers turned to mouth-to-mouth resuscitation, finding it much more effective than blowing smoke up the butt. 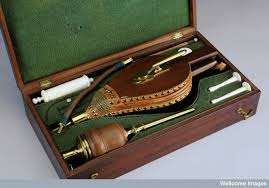