Medicaid is a program for low-income and disabled Americans.  There are 74 million people now on Medicaid, up from 62 million in 2009.

Medicaid funding is both from the state and federal governments, although each state can operate its own program.

Medicaid accounts for 15% of all healthcare spending.

Medicaid spend per patient is about $6000 per year.

Medicaid is free for the patient in most states. They have no co-pays, no deductible, no out-of-pocket expenses, and it is not legal to send a medical bill to Medicaid patients.

Medicare is a program for people who are 65 and older, some disabled Americans, as well as dialysis patients, and was started in 1965.  There are 55 million people on Medicare.  Medicare covers about half of the medical charges for patients who are enrolled.  There are supplemental policies that can cover additional charges.

Medicare is funded completely by the federal government.

Medicare accounts for 20% of all healthcare spending.

The average out-of-pocket cost for each Medicare patient is about $8000 per year. 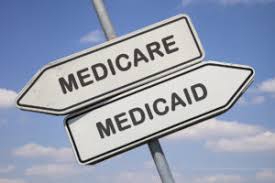