This is the 90th birthday of the antibiotic, Penicillin.

Penicillin was invented by researcher Alexander Fleming.  While thought to be brilliant, Fleming was known for having a very untidy laboratory.

In September 1928, Fleming returned to his London laboratory after a holiday, and found that he had left the staph cultures he was studying uncovered in a corner of the lab.  One of the cultures had become contaminated with mold.

Fleming then removed the mold and grew it in a pure culture, and it produced a substance that killed bacteria.  He called this new substance “mould juice”, then later named it penicillin.

Fleming published a paper on penicillin, but the paper was largely ignored by the scientific world.  Finally, two other researchers helped Fleming mass produce penicillin with funding supplied by the US and British governments.  The timing was fortunate, as these scientists mass-produced penicillin right as World War II started, and they produced enough to treat all of the wounded from the Allied forces. 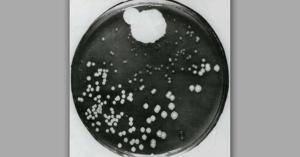