How dirty is that cell phone?

Americans check their phones 47 times per day on average.  Every time we touch our cell phone, we are transferring germs between our hands and the screen.

Researchers looked at the phones of high school students, and found that the average phone had 17,000 bacterial per phone!  That is ten times more bacteria than on a toilet seat.

While most of the bacteria are harmless, some more concerning bacteria such as Streptococcus, MRSA, and E. coli have been found on phones.  In addition, if a phone user has a virus, the virus can also be present on the phone surface.

Dermatologists know that cell phone users can get acne by transmission of bacteria from the screen to the skin when the phone is held against the face.

So what can you do?  Researchers advise not taking our cell phones into the bathroom with us.  When toilets flush, they spread germs everywhere, which is how phones end up with bacteria like E. coli.  Cleaning your phone with a cloth and solution of 60% water and 40% rubbing alcohol has been advised.  Frequent washing of hands can reduce the transmission of bacteria to the phone surface. 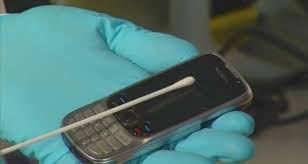