You may have read about the recent Plague outbreak in Madagascar, with 57 deaths more than 680 patients affected.

Plague is caused by a bacteria, Yersinia pestis, that is spread by flea bites.  The fleas are frequently carried by rats.

Plague was actually used as a weapon in medieval times, when infected carcasses from cows or even humans would be launched by catapult into enemy camps!

The Plague can now be treated with antibiotics, so early diagnosis is important. 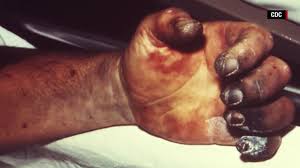