Skip to content
The average employee in the United States takes 5.2 sick days per year.  This includes 3.9 days for the worker’s own illnesses, and 1.3 days taken to care for sick family members.
The average job gives their employees 9 days per year of sick leave.
Employees in the United Kingdom take the most sick days, using an average of 9.1 days per employee.  Workers in the United States take 5.2 days off per year as mentioned above, and workers in the Asia-Pacific region average 2.2 days per year.
In a survey by Kronos, 57% of workers said that they would use a sick day even if they were not sick.  75% of workers said that they would go to work even if they were sick. 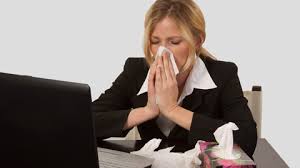