Most of us shower every day now.  But how often did people shower or bathe in the past?

The first recorded evidence of soap was documented in Babylon around 2800 BC, with a written recipe of water, alkali, and cassia oil.

In ancient Greece 800-500 BC, small bathtubs were used for cleanliness    The Greeks also had public baths and showers.  The  Greeks were the first to develop showers through pipe systems.

Early Romans  during this time period cleaned their body by massaging oil into the skin and then scraping it away with a tool called a strigil.  Later, aqueducts brought water to towns, and some homes even had indoor plumbing systems.    Romans began to build elaborate public baths from underground springs and had sophisticated water systems.

In Medieval times, around the years 400-700 AD, public bathing facilities were built by the Church but now included separate baths for men and women.  The baths were built within basilicas and monasteries.  However, many people believed that becoming naked and letting water touch you could make you severely ill, by letting the devil into you.

In Japan prior to the 700s AD, most bathing occurred in natural water springs, but temples also had public baths.  Bathing was considered a religious practice.  Steam baths also became popular.

In the Middle Ages, in the years 500-1500 AD, there were still public bath houses, but wealthy people bathed at home in large wooden tubs.   Buckets were used to bring in water, and was often mixed with perfumes or scented oils.    Peasants rarely bathed other than quick wash-ups with plain water and a rag.

The first modern shower was built in 1767 in England, and had a pump that pushed water into a vessel above a person’s head.  A chain was pulled to release the water.  However, showers didn’t catch on as there was still no indoor pipe systems to bring in the water.

In Victorian times the 1800s, those who could afford a bath tub bathed a few times a month, but the poor were likely to bathe only once  a year.  Doctors advised against bathing believing it had a negative effect on health and on the appearance of the skin.

In the early 1900s a typical family washed once a week on Saturday night. They used  one tub of water, with the father bathing first, then the mother, then each child.

In the mid 1900s, indoor plumbing became widely available along with modern bathrooms. Around this time, advertisers heavily marketed soap and shampoo, and daily showering became the norm. 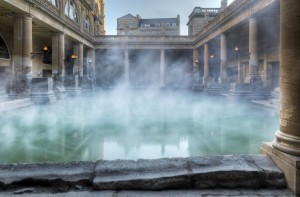 One thought on “How often did people bathe in ancient times?”