The famous legend about Isaac Newton is that he discovered the concept of gravity by having an apple fall on his head while sitting in the garden.  Is that really true?  Newton did tell a friend that he had watched an apple fall from a tree, and wondered why it fell straight down towards the earth.  He then began to develop the laws of gravity and motion.

Isaac Newton was known to be a very odd person.  One time, for an experiment, he stuck a sewing needle into his eye socket and rubbed it around, just to see what would happen.  Amazingly, he had no long-term damage.

Another time, he stared at the sun as long as he could to see if it would affect his vision.  He had to spend several days in a dark room to recover.

Isaac Newton was also the inventor of “calculus” math.  But, after inventing calculus, he then did not tell anyone about it for 27 years.

At a time when all of the most famous scientists were trying to figure out the orbits of planets around the sun, Newton announced he had already discovered it, but then admitted he and lost his papers in his house and could not find them anywhere.  The famous astronomer Edmond Halley asked him to redo the calculations and Newton agreed, writing his famous book known as the “Principia”,  which described the laws of planetary motion. 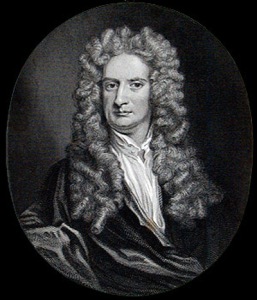