Tonsillectomy is a surgery to remove the tonsils of the throat.  It is one of the most common surgical procedures performed in the United States, although it used to be performed at an even higher rate in the 1950s.

Do we need our tonsils?  Tonsils are lymph tissue.  They fight against infections entering our bodies.  The tonsils in our throat are the first line of defense for our body to fight infections.

Does it work?  Science shows only slight improvement of reducing episodes of throat infections, and the improvement after tonsillectomy only lasts for about one year.

Are there risks of tonsillectomy?  Risks include mortality rate of 1 in 15,000 from bleeding, airway obstruction, or complications from anesthesia. 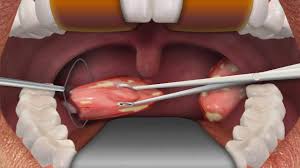