A study found that patients with a positive mood lived up to 5 years longer. One reason may be that researchers found that this group exercised more than those who had a negative outlook (http://circoutcomes.ahajournals.org/content/6/5/559).
A study that was done on law students showed that students who were positive and optimistic had better immune systems, so could fight infections better (https://www.ncbi.nlm.nih.gov/pmc/articles/PMC1948078/).
A very interesting study occurred with patient’s with Parkinson’s Disease.  Parkinson’s disease causes tremors and difficulty walking, because the brain cells have decreased levels of Dopamine.   In the study, a new medication was given to half the patients, and the other patients got a “placebo”, or sugar tablet.  The group that was taking the placebo actually showed significant improvement.  And their MRI scans showed improvement in brain activity!  (https://www.ncbi.nlm.nih.gov/pubmed/11498597)
How could this possibly happen?  The scientists believe that the placebo actually caused dopamine to be released in the brain.  We know that dopamine is part of the “reward center’ of the brain, and is released when a patient feels happy and rewarded.  So the  placebo actually increased the dopamine level, because the patients felt hopeful and positive about their condition being treated!
Pet Scan of Parkinson’s patient before and after placebo: 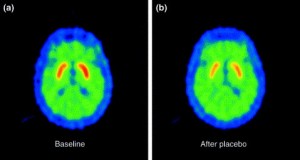